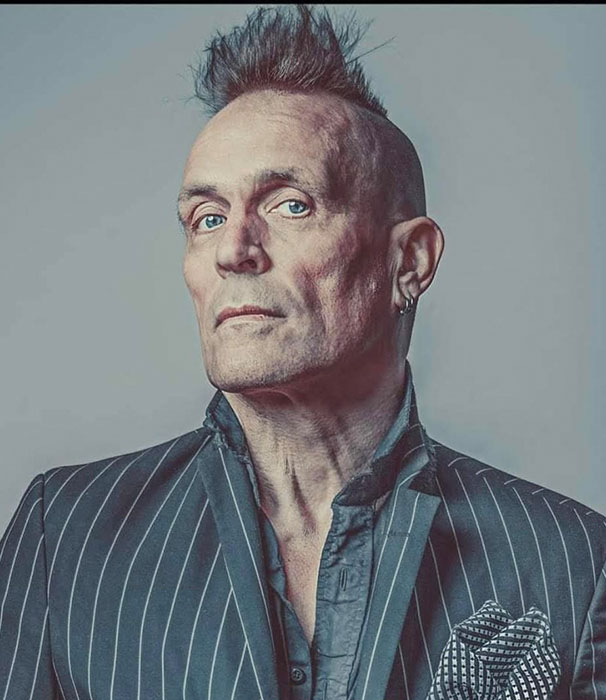 John Robb is a many-faceted creature. Bassist and singer for post-punk dark energy mainstays The Membranes, best selling author, radio and TV presenter, journalist, DJ, publisher, driving force behind the Green Britain Academy – a soon to be launched game changing national scheme for green apprenticeships, model (fronted the recent bDoc Martens campaign) he also puts on his own music and books event – Louder Than Words and a new vegan festival – he’s all these things and more.

He grew up in Blackpool before punk rock came along and saved his life. His band, The Membranes, toured the world achieving a cult status.

He was one of the leading post punk fanzine writers in the UK with his fanzine, ‘Rox’, before he went on to write for the rock press with Sounds and was the first person to interview Nirvana and many others like KLF, the Stone Roses, the Manic Street Preachers and coined the expression Britpop and was instrumental in kick starting and documenting the Madchester scene with his writing.

His website louderthanwar.com is currently one of the biggest music and culture sites in the UK and is now also a nationally distributed magazine. He is a TV and radio regular appearing on BBC Breakfast TV, Sky Arts, ITV Breakfast and many documentaries as well as filming a very popular series of interviews for Lush Cosmetics website – filming exclusive one hour interviews with people like Green party leader Caroline Lucas, musician Shaun Ryder, comedian Stewart Lee and many others for them ( http://louderthanwar.com/watch-all-of-john-robbs-lush-interviews/#.Wi_rrjYSSt4.twitter).

John Robb has written many books including the best selling and definitive biog on the Stone Roses – ‘The Stone Roses And The Resurrection Of British Pop’ and what is considered one of the most important books on punk rock -Punk Rock – An Oral History’ as well as a oral history of Manchester music, a biog on the Charlatans and a book about underground music in the UK in the eighties. He is currently working on a new book ‘The Art Of Darkness’ about post punk and goth music due to be released in the spring and has just released a cowritten book with the UK’s leading green energy guru Dale Vince called ‘Manifesto’ and is working a collection of his journalism and his own autobiography.

His Louder Than Words music and books and in conversation event is the biggest in the UK and he also chairs committees in Parliament and is an in demand speaker with his spoken word show spawned by the success of his talks of TEDx on punk, zen and the universe in demand across Europe where he also chairs many panels and competes many events.